Svenska Fotografers Förbund is a swedish magazine about photography. Amanda Nilsson, one of the photographers that Ängie works the most did an interview on a session with her and talked about the experience.[1]

We translated only the parts of the interview that talks about Ängie. To read the whole article click the first reference.

Ängie, a prolific Swedish artist who debuted with the single "Smoke Weed Eat Pussy" in 2016 and was called "the most shocking pop star of 2016" in The Sun, knocks on the studio door at the same time after slipping from Fridhemsplan along the icy sidewalks. She comes alone this time, both to keep the risk of infection down in corona times and because she likes to take care of styling and make-up on her own.

"Look, I thought I would have this for my first outfit today," she says and lifts up a fantastic hat creation of a kind of black net crowned by a large flower.

Amanda Nilsson has photographed Ängie several times in recent years, which contributes to the fact that new poses and adjustments of the clothes flow quickly when they work with the still images in the first, black and white checkered, look. Pretty soon Amanda starts to feel that she has found the right expression and shows some of the newly taken pictures.

After a few complementary variants, they are both satisfied, and it's time to re-rig. Ängie does not mind the break, but is rather grateful for the natural smoking break. Ängie starts moving in front of the camera again. "You can start by posing as you did, but get there a little slower," says Amanda and looks focused on the screen that sits next to the camera.

After two changes of clothes and make-up, today's combined photo and film session is over. Ängie picks up her belongings in the roller bag and Amanda begins to restore the equipment in the studio, which she shares with three other photographers. "Ängie is an artist who wants great control over everything around her music and brand. It's fun to have continued confidence to make promotional material for her," says Amanda. 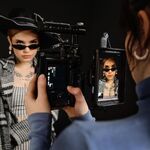 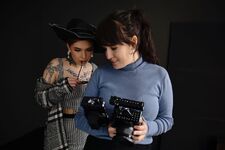 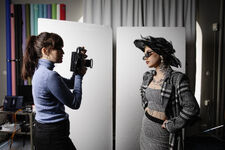 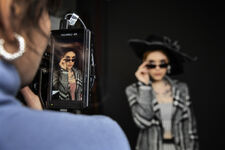