"Follow The White Rabbit" (stylized in all lowercase) is the second fell-length studio album by Ängie & Harrison First. The album was written and recorded throughout 2020 and 2021, and was released on November 18th, 2021.

After the release of Not Pushing Daisies, Ängie and First immediately began work on a follow-up project. The first song written for the album was "Summer In The City," written in July of 2020 and recorded alongside "Down By The Bay" that August. Other tracks were shared throughout the remainder of 2020 on Harrison's Telegram group and Discord, as well as on Instagram. In December of 2020, the duo recorded a cover of Cat Power's 2000 song "Naked, If I Want To," though it's possible the cover will not be on the album and instead on an EP of covers.

In 2021, they continued to write and record the album in fulll force, often making multiple Instagram livestreams and hinting on new music over their social media. After some break after new years eve, the first session of the year was in February 3r, 2021, which was transmited live over Harrison First's Discord group.[1] During the stream two songs were seen recorded "If I Can't Have You" and "Cool For You". On March they had multiple sessions, some of which were livestreamed by Ängie on Instagram. That month, they recorded over five songs including "Love Is A Losing Game"[2], Violent Love"[3], "Cherry Psycho"[4][5] and "Summer Rain". After recording "Cherry Psycho" and a cover of "White Rabbit" by the band Jefferson Airplane in the next month, Ängie and Harrison decided to go for an alternative rock sound for the album.

Again in April, they continue recording the album[6], always with the same strategy to update fans through social media in livestreams. By this point, Harrison had played entire demos from the sessions on his Discord chat multiple times to test audiences, and Ängie continued to make livestreams of some sessions. Aside from cleaning up productions on already recorded songs, in April they also recorded "Pick Up The Phone" and "Borderline". After a quick trip at the end of the month, they continued sessions on May 2021, this time much more reserved. It's known that "Devil's In The Details" started to be recorded at the end of that month, and re-worked the next.[7]

On June 3rd, Ängie posted a photo on Instagram with a caption saying the record was almost done, and they had only re-recordings and clean ups left to finish.[8] They had sessions throughout the whole month with this objective[9][10], however, after this post, they still recorded a few new songs for the record, including "Dreaming Of Paris", recorded late-July.

Between sessions, Ängie posted multiple captions with wrotes from new songs, especially in the months on July and August, especially "Dreaming Of Paris", which she mentioned a lot during a brief visit to Paris with new affair Ola Rapace, and other songs she wrote for a different record with another producer. On August 1st, Ängie posted an Instagram photo with a supposed tracklist for the album,[11] and another one changing order and adding some other songs on August 18th.[12] Later after Ängie posted the oficial tracklikst, she made it clean that the other 2 previous ones she posted were for another album.

On August 19th, Ängie did a concert on World Pride 2021, in which she sang three songs from the album for the first time "Violent Love", "Cherry Psycho" and "Playboy". August 20th, Harrison posted on his Twitter that they might have found the lead single for the album, and he was thinking about releasing it early as an NFT before an offcial release - Harrison has a crypto currency and works on selling NFT's online.[13] On August 25th, Ängie posted on her Instagram that she finished writing all the songs for her next album: "I know you guys really want me to release the album and I will, but I also want you to know I wrote the 3rd album this summer and it’s gonna be great! Be ready for a whole lot of new songs. #writingmachine"[14]

On October 1st, Ängie and Harrison did the cover photoshoot for the album, and Harrison posted a video and photo of them at the studio on his Instagram Story.

After much anticipation, Ängie and Harrison finally announced that their second album would be called "Follow The White Rabbit" and it would be released on November 18th, 2021. [15] Later on the same day, Ängie posted the official tracklist for the album, cutting many of the tracks that were teased over the months. 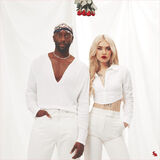