1. BAMBAM (June 14th, 2019)
"Each Other" is an extended play (EP) by Ängie in collaboration with producer Harrison First. It was released on June 14th, 2019 on Soundcloud and other streaming services.

About the production of the album, Ängie stated: "When we wrote and produced the songs, I really wanted to create something that felt authentic in the moment, and I hope everyone can relate in some way. [...] What is so interesting is that even though we come from two completely different places in life, everything happened in a very natural and genuine way."[1]

The EP contains three songs, according to their own opinion the perfect length for the listener to understand and follow along on the journey.

"After following me for a while on Instagram, he was in Stockholm and got a canceled session, so he sent a DM and wondered if I wanted to work with him. And that's exactly how it happened." – Ängie about how the collaboration came to happen. The first day they met, BAMBAM was created, the second day: See Through, and the third: Dangerously.[2]

"Each Other" tells the story of two people in a dysfunctional relationship, but who are still trying to find their way in life and love. The story is told from Ängie's perspective.

Harrison First shared an alternative cover of the EP on the app Roll in July 2nd, 2020. It was supposedly shot before the original cover, but wasn't approved by the duo so they did a new photoshoot for the cover that we know today. 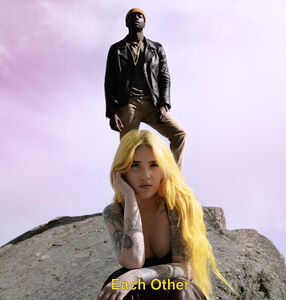