Harrison First
"16" is an unreleased song by Ängie and produced by Harrison First, written for their second studio album, due to be released on 2021.

The song was first mentioned in an alleged tracklist Ängie posted in a photo on her Instagram, on August 1st, 2021. Five days later, she posted a photo with a verse of the song in the caption, and then mentioned it again in another tracklist she posted on the 18th.

Not much was known about the song, until she posted a new picture on September 11th, in which she shows a painting with the songs lyrics similar to the one she made for "4 Roses". This one also had an illustration of Ola Rapace alongside with it on the picture.

The song seems to be talking about the new relationship she got in with Swedish actor Ola Rapace, that seemed to be getting more serious very quickly, and even mentions the trip to Paris they did together.

I'm your pretty girl
For once you don't feel 45
Blue, make me feel as (?) your Paris blue
Of all the pretty flowers
Forget me not is true

Your love always reminds me
That I don't have a clue
And we don't know shit
About the things that we do
My nails are painted bright
In what you call Paris blue
Show me love, show me passion
That I never knew 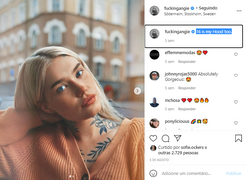